Located in Pickering, Ontario (just east of Toronto), Ontario Power Generation’s Pickering Nuclear Generating Station (GS) is one of the largest nuclear stations in the world and has been safely and reliably providing Ontario with power for decades.

Learn more about this world-class facility, which features six operating CANDU® reactors (CANadian Deuterium Uranium), and accounts for approximately 14% of Ontario’s electricity needs, while generating power that is virtually emissions-free.

In savings for Ontarians until 2024

Ontario’s electricity is produced at Pickering

A powerhouse of efficient energy generation, Pickering can be safely operated until 2024.

Doing so will create savings of $600 million for Ontarians and avoid 17 million tonnes of carbon emissions.

Further positive economic impacts can be reviewed in this April 2018 report from the Ontario Chamber of Commerce.

Continued operation of the Pickering Plant during refurbishments of other OPG facilities allows for a steady supply of power to Ontario.

In a separate license, the CNSC renewed the operating licence for the Pickering Waste Management Facility until Aug. 31, 2028.

Pickering then and now

The first four Pickering Nuclear reactors went into service in 1971. In 1997, these reactors were placed in voluntary lay-up as part of our predecessor company Ontario Hydro's nuclear improvement program. In September 2003 and November 2005, Units 4 and 1 (respectively) were returned to commercial operation, with Units 2 and 3 staying in a safe shutdown state.

Units 5, 6, 7 and 8 at Pickering Nuclear continue to operate safely since 1983 when they first entered operations. They have a combined capacity of approximately 2,100 megawatts.

Recognized as safe and reliable

Learn about the safety systems designed to keep you safe. 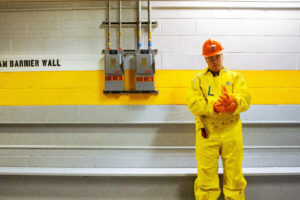 Learn how OPG builds safety into every step of our energy production and about our comprehensive emergency preparedness plans for Ontarians. 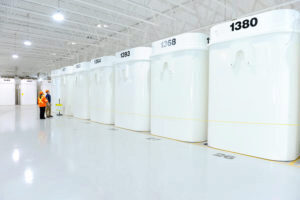 Learn about nuclear by-products and how OPG is a world-leader in safe and environmentally-sound nuclear material management.