It can be complicated to understand the benefits and effects of radiation.

To better understand radiation and its relationship with nuclear generating facilities it’s important to first learn what it is and the importance Ontario Power Generation places on safety, stewardship and community protection.

Simply put, radiation is the energy emitted by an object in the form of electromagnetic waves or particles, and it’s all around us.

Naturally occurring sources of non-ionizing radiation include ultra-violet and infra-red light, while man-made sources include radio waves or microwaves (although these also occur naturally).

Naturally occurring sources of ionizing radiation include cosmic rays, radioactive gases (such as radon and thoron) which escape from rocks and soils, and even the naturally occurring isotopes within our own bodies (potassium). Man made sources of ionizing radiation include medical scans, medical isotopes, X-rays, nuclear power generation and many others.

The amount of radiation exposure a person receives depends on many variables.

How is radiation measured?

Exposure to radiation in humans is measured in millisieverts (mSv).

A millisievert is a measurement of radiation dose by an individual. The average exposure of Canadians is 1.8 mSv per year.

In 2017, living near one of OPG’s nuclear plants in Durham Region added less than 0.002 mSv to this amount over the course of the year. By contrast, the food and water we consume each year account for approximately 0.3 mSv.

Tritium is a radioactive isotope of hydrogen. It can occur naturally in the atmosphere when cosmic rays collide with air molecules, or when there are nuclear interactions with deuterium (heavy water) atoms.

OPG takes samples daily at local municipal water treatment plants and the results are consistently below our voluntary commitment of 100 Bq/l.

Radiation – it’s all around us

A history of safety

In more than 45 years of operating our facilities, no member of the public has ever been harmed from OPG’s nuclear operations. In addition, we have never exceeded regulatory limits on radioactive releases into the environment. Emissions do occur during normal operations however, the multiple technological and operational safety measures our facilities have in place ensure any release is extremely small when compared to the heavily mandated regulatory limits.

Minimizing our impact on the environment

One of our top priorities is to safely operate our facilities in a manner that minimizes impact on the environment.

We work closely with local conservation authorities, the Durham Regional Health Department, the Ministry of the Environment, Conservation and Parks, the Ministry of Natural Resources and Forestry and the Canadian Nuclear Safety Commission, to ensure the environment is not adversely affected by our operations. All of these agencies provide oversight to Durham’s nuclear plant operations. As well, OPG publicly reports its emission rates four times each year.

Get to know nuclear power 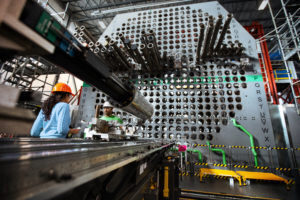 Find out how nuclear energy works and Ontario Power Generation’s role as an energy leader for Ontarians. OPG’s primary commitment is to the safety and security of Ontario’s communities. Explore our Nuclear Safety Systems to learn more.